As of 2020, over 3.8 billion people are now using social media across the world. This number hadn't even passed the threshold of 1 billion in 2010, but grew quickly and continues to rise as we progress deeper into the social media revolution.

The question is, how do you know which ones make the most sense for you?

As discussed in our previous entry, social media platforms are all vying for a scarce resource: your attention. Each one specializes in a method of communication or ideal user demographic. In this blog post, we will categorize social media apps, sites, and networks into similar groupings so it's easier for you to choose between them based on what you want or are looking for.

Certain methods of social communication prioritize audiovisual communication. The two most popular ones at the moment are YouTube and TikTok. They are both large social video platforms, but each exists for different reasons and attracts a slightly different audience.

Google is the most popular search engine, but did you know that YouTube is the second most used search engine in the World? With that kind of search volume, there are also many benefits of using YouTube for business purposes and marketing.

By contrast, the shorter form TikTok limits videos to a minute or less. TikTok is a platform driven by virality and music, often showcasing and sharing clips of popular audio tracks that can be edited, recorded over, and performed with other TikTokers. In fact, TikTok only rose in popularity after the acquisition and rebranding of the popular muscil.ly app.

According to Wired.com, TikTok's "For You" algorithm is also designed to create an equitable playing field for creators.  When a video is uploaded to TikTok, the For You algorithm shows it first to a small subset of users. If they respond favorably—say, by sharing the video or watching it in full—TikTok then shows it to more people who it thinks share similar interests.

Some platforms specialize in photos rather than moving video. Although Instagram and Snapchat both have a casual filming feature (called "stories") their main purpose revolves around photos, similar to Pinterest.

Pinterest, a site that still sticks to its original purpose of "pinning interests"  is a customized collection of themed "boards." Pinterest boards can be created under such topics as "home decor," "wedding ideas," or "cute animals" and is essentially a place for people to house various photos grouped by category. It's a great website to use for event planning, design inspiration, shopping, or recipe collecting.

Pinterest boards can also be "followed" so it's easy to keep up with people who have similar interests as you.

Although some businesses do use Pinterest for advertising, the primary "pinners" are still people looking for a place to store their online collections.

The combination of "instant" and "telegram" we know as Instagram had a much smaller user base when it began in 2010. The first Instagramers were primarily made up of professional and amateur photographers who needed an artsy photo feed to showcase their work. It has since become an outlet for a much larger portion of the population with new features like IGTV, Stories (which competes with Snapchat), and Reels (which competes with TikTok).

Although Instagram can be and is used by friend groups as a close knit social app, it's most often utilized on a wider scale as a mass marketing engine for online products or services. Heavily edited and filtered photos has also given rise to "Influencers" or "Instagram models" who make a living off the platform.

Snapchat is the most personal form of social media in this category. One can become friends with a person via Snapchat only if their exact ID tag or QR code is known. This information can be found via several sources, such as a phone number on a contact list, a Snapchat URL, or precise knowledge of someone's Snapchat username.

Once accepted, it is then possible to send "snaps" to individual friends. Users can also post 24 hour pictures to their "story" which is visible by everyone in the friend group. Smaller groups of friends can be curated from the larger one for an even more personal touch.

Although Snapchat is the most personal of the three, it has recently added new features such as "stories" called "For You" which allows outlets (delivering news or celebrity gossip) to use Snapchat's platform for information distribution.

The most unique aspect of Snapchat is its ephemerality. When "snaps" (or text messages) are sent, the person on the receiving end has just 24 hours to view it before the photo or text disappears forever. Also, both users receive alerts if either party tries to take a screenshot of the photo or text conversation.

Facebook has elements of all the platforms above, but now emphasizes its community of groups more than any other feature. Mark Zuckerberg also envisions the future of social networking to be privacy focused. LinkedIn, in comparison, is "Facebook" for business and professional networking rather than social entertainment or media.

Facebook has over 2.7 billion users worldwide, and has more features than any of the other apps on this list. Aside from groups, Facebook boasts the ability to post and organize photos, create Stories, post "Statuses,"  interact with photos using different "reactions," and has even launched Facebook Dating and Jobs. Facebook is also a popular platform for businesses to run ads (which is how they profit off the information they sell).

LinkedIn is for professionals, job-hunting, and professional networking groups. It has over 575 million users and offers a premium option for those who wish to access more analytics, targeting features to hunt for jobs, and for sales outreach through InMail. They've also copied popular social networking platforms by introducing Stories (and "reactions") as features of their own.

Twitter is similar to the "Status" feature of Facebook in that it's meant to post what's on your mind in real time. The difference is that there is a 280 character limit (up from the 140 character limit it used to have).

Twitter Lists can be compiled to organize all preferred Twitter accounts, similar to the way that Subreddits can be joined to host a collection of contributions to a single conversation.

Although any platform has the potential to be toxic, Subreddit communities are governed individually by moderators. Each group has its own community rules and moderators can close certain groups to people who refuse to follow their rules.

Twitter, by contrast, is more of an open platform. Even though Twitter also has community guidelines, it takes longer to catch rule breakers because there is one large group rather than many smaller groups.

Whatsapp is a messaging app owned by Facebook. Although it is end-to-end encrypted, Telegram (a similar free service with similar features) claims to have more secure messaging.

Whatsapp as a messaging service was accidentally founded in 2009. Originally it was meant to "ping" everybody in one's circle of friends with short updates such as "I'm on my way." However, it quickly became an alternative to the poorer functioning MMS messaging that existed at the time, especially for people who wanted to avoid the charges of international texting and calling.

People began to take notice and WhatsApp rapidly rose into the top 20 on the App Store by 2011. Eventually, WhatsApp got acquired by Facebook for $19 billion.

Telegram has both "channels" and "group" features. The difference is that "groups" are for circles of friends and "channels" can be likened to Subreddits. A particular "channel" is for anyone who wants to talk about the specific topic that is the subject of that channel.

It's pretty easy to join a channel, although some are public and some are private. There's a built in search feature you can use, as well as sites that recommend Telegram channels to follow and even allow you to see the Top 100.

Although the services themselves are similar, the difference between Telegram and Whatsapp is the level of privacy and security.

Unfortunately, Google had the ability to index links to what were supposed to be private conversations on WhatsApp. This security issue on WhatsApp was quietly removed when Whatapp's owner (Facebook) made a change without drawing attention to the situation.  Another concern with Whatsapp's lack of privacy is the fact that it shares data – namely, your phone number – with Facebook for the purpose of curating advertisements.

So, seeing this comparison of popular social media platforms of today, which ones best fit your requirements?

As previously mentioned, social networks serve different purposes depending on who is using them and why. Each social media platform has its benefits and drawbacks. The one you decide to choose is completely up to you and also depends on your personal or professional objectives.

As a final note, we would be doing a disservice to you by not mentioning our new social network called TapeReal.

Compared to traditional social media, TapeReal is easy to use yet powerful when it comes to providing an ad-free and privacy-focused communication experience.

TapeReal's vision is to connect humanity in meaningful ways.

It's designed to create dialogue between humans. We do this by putting people first and encouraging real social interactions.

After all, isn't that the purpose of social networking platforms? To get people to speak to each other? 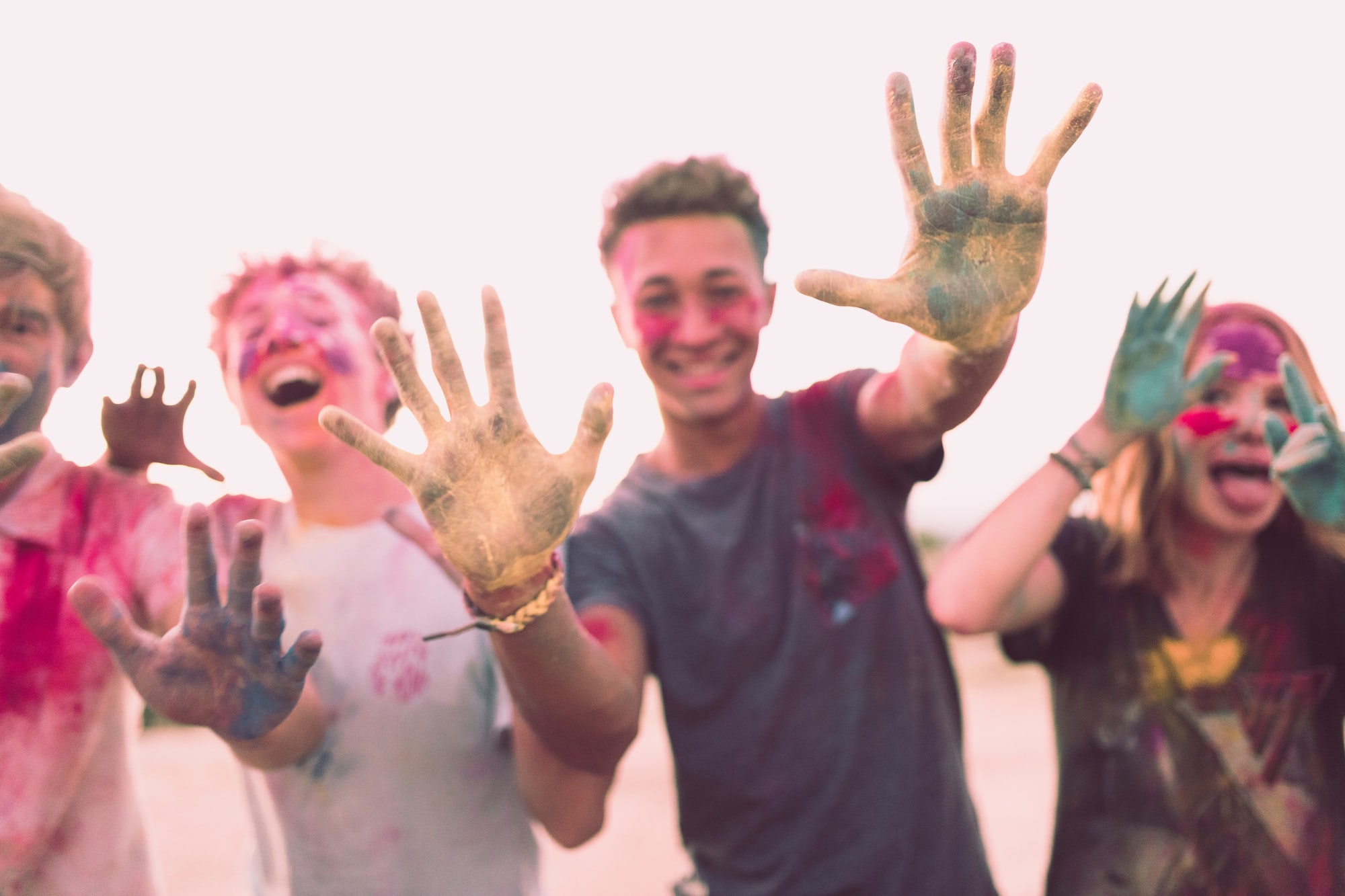 We want teens and their parents to know that privacy is a non-negotiable and that TapeReal has a spotlight on authenticity over popularity. This helps maintain built in accountability and keeps our platform focused on conversation.

We need to move forward. But why? What does “moving forward” mean in terms of modernizing social media and communication? After all, we now have countless choices in social media